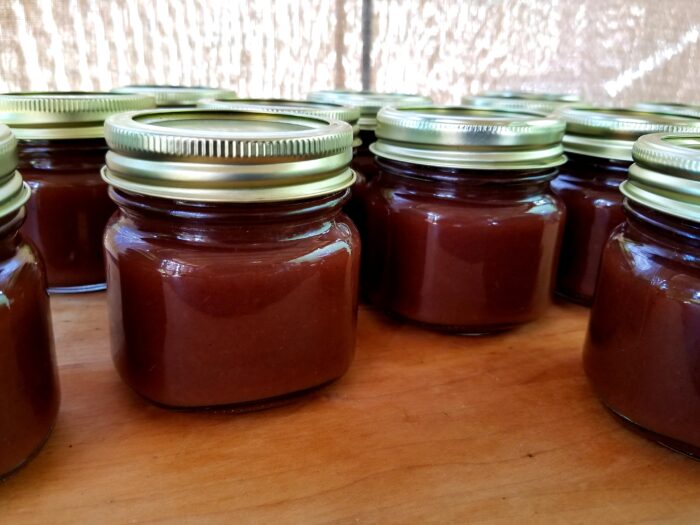 You can buy some apple butter from me (you can find it here)–but you can make it yourself! I’ve been sharing my recipe for apple butter for years, and I thought now was a good time to share it again after something my customer (the one who ordered the 30 jars) mentioned to me. She had bought a jar of apple butter, to sample, from another shop. (Not mine!) This was previous to her coming to my shop. Since she was planning to order a large quantity that she is giving out at an event, she ordered a jar first to try it out. She was quite distressed with what she received. She said the jar wasn’t filled anywhere close to the top, it was overly sweet, there were apple peels throughout the apple butter, and there was even rust on the jars. (Yikes!) After that experience, she came to my shop. Happily, after she had ordered a jar from me to sample, she was thrilled with it and came back to order 30 more for her event.

I have no idea who she ordered the other jar of apple butter from. I’m just glad I passed the test with mine! But it did make me think of posting about the marvelous, magical Squeezo again. Don’t make the mistake of apple peels in your apple butter! Nobody likes that! Whether you’re making it for yourself, for gifts, or selling it (what? stop that! ha), make it easy–and right. Use a Squeezo!

that I have. It’ll make short work of a box of apples! 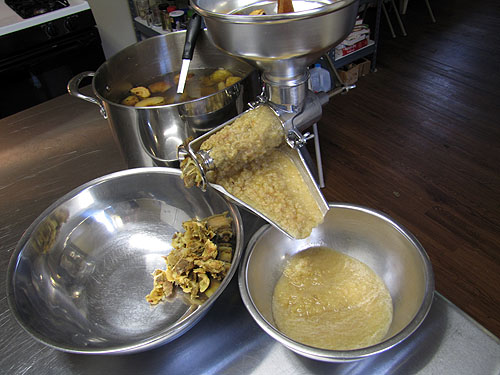 If you’ve never heard of the fabulous Squeezo, it is the best food strainer ever invented. I have a Squeezo tutorial here.

And here is my tried and true apple butter recipe. This recipe is written per quart so that you can multiply it by however many quarts of sauce you have available. (You make the sauce using the Squeezo.)

Printer-Friendly
How to make Apple Butter:

*Adjust amount of sugar to suit your taste. Start with the lower amount and see how you like it. I really don’t like my apple butter to be super sweet, but that’s me. Remember that as you cook it down, the flavors will intensify, which is another good reason to start on the low end with the sugar.

I simmer my apple butter in big crock pots. Whatever you’re using, combine the applesauce, sugar, cinnamon, allspice, and cloves in the pot and mix well. Simmer for several hours, stirring occasionally. I often simmer ALL day to get to the thickness I prefer. (Sometimes into a second day!) Side benefit: your house smells awesome while you’re doing this.

Process pints or half-pints in a boiling water bath 10 minutes. And fill those jars up–you don’t need to leave more than 1/2-inch headspace. (I use a steam canner.)

These are hands-down my favorite muffins–the flavor combination is spectacular, though if you don’t want to use pecans, you can leave them out. If you must. Before making these, be sure to check out My Top 10 Muffin Hacks and also see How to Zest the Best Lemon (or orange!). In my Muffin Hacks post,...
Read More

Meat chickens, making peace with their fate on their last morning. PLEASE NOTE: Chickens were harmed in the making of this post. If you’re not comfortable seeing photos and descriptions of where chicken comes from, please don’t continue. This post is for those who are interested in learning more about the chicken butchering process–whether you’re...
Read More

Muffins are a deceptively simple thing to bake. Child’s play. One of the early recipes kids learn to make, along with cookies and cupcakes. And yet, like many things that appear simple, a truly excellent muffin takes–not more effort–but more know-how to achieve. No matter your favorite recipe, any batch of muffins can be taken...
Read More

I do a lot of zesting. Lemons, oranges, even limes. I think it’s fair to say that I zest more than the average person! This is, of course, due to all the experience I get with Etsy orders for popular items like cranberry orange pecan scones. And blueberry lemon oatmeal cookies. And all sorts of...
Read More

My name is
Suzanne McMinn
I live on a farm

I am a Navy mom

I am an Army mom

See All My Videos

Find Everything on CITR

If you would like to help support the overhead costs of this website, you may donate. Thank you!

"It was a cold wintry day when I brought my children to live in rural West Virginia. The farmhouse was one hundred years old, there was already snow on the ground, and the heat was sparse-—as was the insulation. The floors weren’t even, either. My then-twelve-year-old son walked in the door and said, “You’ve brought us to this slanted little house to die." Keep reading our story....

Everything you need for spring gardening

Explore Chickens in the Road

I Have a Cow

Entire Contents © Copyright 2004-2022 Chickens in the Road, Inc.
Text and photographs may not be published, broadcast, redistributed or aggregated without express permission. Thank you.